In 1917, near the end of Falls Creek’s first camp session, a young believer by the name of Rosalee Mills surrendered her life to God in a call to ministry. With that recorded decision, Miss Mills became the first person ever called to ministry at Falls Creek.

Miss Mills attended college at Oklahoma Baptist University and taught in the Shawnee public schools for five years. While preparing for missionary work at the Southern Baptist Training School in Louisville, Kentucky, she met David Appleby. The two were soon married and were appointed as missionaries to Brazil in 1924. A year later, Rosalee’s husband, David, grew ill with an intestinal ulcer and died from complications in surgery. Rosalee gave birth soon after David’s death, but instead of returning home, she continued the Lord’s work in Brazil. From 1926 to 1940, Mrs. Appleby was Director of the Department of History and Statistics of the Brazilian Sunday School Board. She retired and returned to America in 1960. She passed away in 1991. 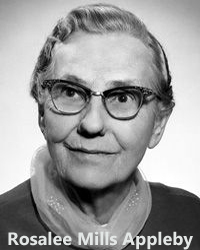 Oklahoma Baptist University grants an annual Rosalee Mills Appleby Award, named for this extraordinary woman who served as a missionary, writer, and teacher in Brazil for 36 years. The Appleby Award was established in 1936 as OBU’s first award and has been given annually since that time. The award is given to the woman of the graduating class who most nearly exemplifies the qualities which characterize the ideal OBU woman, including personal character, scholarship, leadership, concern for others, and Christian commitment. OBU’s eighth president, John Wesley Raley, said of Appleby, “The foreign mission tide at OBU started with Rosalee Mills Appleby, and it’s still going on today.”

In order to qualify for membership in the Appleby Society, you must:

You can register to be a member of the Appleby Society by completing the form below.